The Taliban’s seizure of power in Afghanistan raises fears of the worst for many Afghan citizens. Attempts by the population to flee the country via Kabul airport dominated our headlines for several days. Among those who fear terrible retaliation from the Taliban are judges, especially women magistrates.

Many associations of judges and lawyers, national and international, have sounded the alarm and relayed it to their governments and international organizations. Justice for Rule of Law joined ASM and wrote to the Belgian Minister of Foreign Affairs. The same letter has been sent to Didier Reynders, the EU Commissioner in charge of Justice and Rule of Law.

We cannot and we will not abandon these courageous jurists and activists to the mercy of Taliban regime. 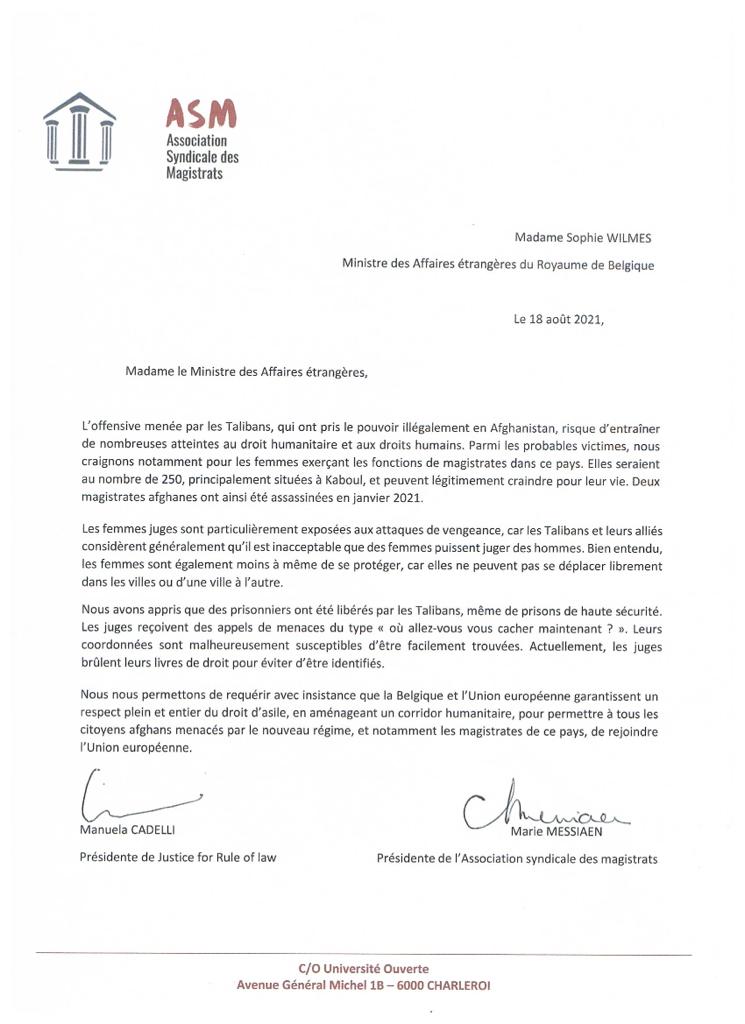 The offensive led by the Taliban, which seized power illegally in Afghanistan, risks causing numerous violations of humanitarian and human rights law. Among the probable victims, we fear in particular for the women exercising the functions of magistrates in this country. Around 250 women judges, mainly located in Kabul, and can legitimately fear for their lives. Two Afghan magistrates were murdered in January 2021.

Women judges are particularly vulnerable to revenge attacks, as the Taliban and their allies generally consider it unacceptable for women to judge men. Of course, women are also less able to protect themselves, as they cannot move freely in cities or between cities.

We have learned that prisoners have been released by the Taliban, even from high security prisons. Judges receive threatening calls like “where are you going to hide now?” “. Their contact details are unfortunately likely to be easily found.

Currently, these judges are burning their law books to avoid being identified. We allow ourselves to insist that Belgium and the European Union guarantee full respect for the right to asylum, by developing a humanitarian corridor, to allow all Afghan citizens threatened by the new regime, and in particular the magistrates of that country to reach the EU territory.

JUSTICE FOR RULE OF LAWFollow

Retweet on TwitterJUSTICE FOR RULE OF LAW Retweeted

Considering the fact that almost all verdicts in so-called “terrorism” cases in 🇹🇷 are based on absent witness statements (and secret witnesses in many cases), FAYSAL PAMUK v TURKEY is yet another reason to keep the hopes alive for justice ⚖️

TRIBUTE TO DAVID SASSOLI
@MedelEurope recalls @EP_President through his words at our March 2019 conference: “We have a lot of work to do. We have to re-build a sense of humanity at risk of dissolution or removal. We have to do so, everyone, making an effort of responsibility”.

Universal reach of human rights law may play an important role to prevent human rights abuses. Torturers have to think twice before inflicting torture to detainees. It’s a very promising decision in the protection of human rights. https://twitter.com/yavuzaydin8/status/1481656435419222016

Nowhere to escape for torturers!

Sooner or later, each one of such culprits will face justice ⚖️

German court finds Syrian ex-colonel guilty of #CrimesAgainstHumanity for his acts in 2011-2012, under the principle of universal jurisdiction.